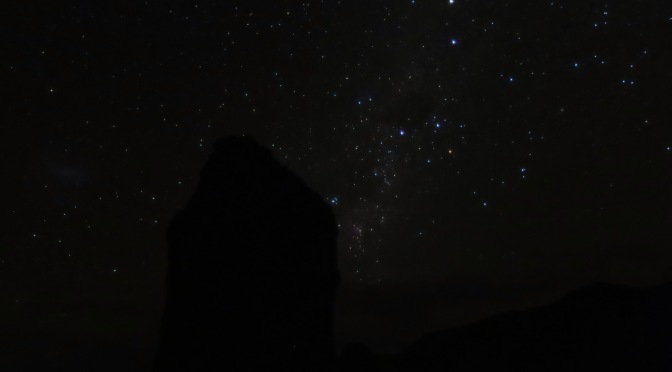 After a bit of climbing on the local Esquel crag, La Palestra, we stocked the van and headed over to Piedra Parada. The drive took a bit longer than expected, but the excitement in the van was palpable. The only shortage we had was firewood, that was until we passed a small farmstead that had a big pile of logs. I stopped and went in looking for the farmer who was just returning from the fields, and when asked if we could buy some logs he just said to help ourselves. Actually he helped us select the best driest logs – he was interested in our van so I gave him a quick tour. He thought it was pretty cool, especially the stove. People in Argentina are the best! We said farewell and headed on now fully stocked with nice dry logs.

After a couple of wrong turns the enormous volcanic remnant that is Piedra Parada hoved in to view. It is quite awesome, basically a 200m high boulder sat singularly on the plain.

We stopped by the campsite to try and get a copy of the guidebook only to find it deserted, but we could see the farmer in the field. We drove back down the road to speak to him to be told that the campsite would be 25 pesos a night, but all the facilities were closed for winter and he had no copies of the guide to sell, just one to look at. We said didn’t need the campsite as we had the van, but we’d pop back to have a look at the guide later.

We went climbing, picking lines we liked the look of or some of the few lines given in the pdf from the Petzl website. The weather was perfect – about 20 degrees, sunny and dry. We had a really fun afternoon, it had been a good month or so since we last climbed. The sun started to set so we headed over to the farm to see if we could get a look and some photos of the full guide. The place was deserted again apart from a couple of dogs. We returned to the van and started on the evening van routine, setting the fire, making tea and getting dinner on the go.

Then we had a visitor, one of the farm dogs. He was quite a cute character, clearly desperate for company and maybe a little food! He whined and whimpered every time we shut the door for a while before settling down to guard us. His presence could be quite disruptive when trying to answer a call of nature however, usually requiring one of us to run interference – something of a performance in the middle of the night!

The night skies were incredible! We spent some time marveling at the Milky Way, perhaps the clearest we had ever seen it.

The next day we decided to tackle some routes on the Piedra accompanied by our new best friend, who we had decided to christen Herbert. He went off chasing hares and we picked the easiest bolted route we could find, which was still quite hard, too hard for Barbara to follow at least.

I started to look at some trad. climbing possibilities to get to the top, or rather the only one that looked reasonable. Then I spied a bolted belay. Awesome! I fetched Barbara and we started climbing.  The first anchor could be seen from the ground and it was guess work after that, but I just went with following the line of least resistance and occasionally some bolts. When Barbara left the ground poor Herbert was bereft at being abandoned, running back and forth crying – it was heartbreaking!

After 5 pitches the line of least resistance was an overhanging chimney full of loose rock, so I took a walk round the terrace,there were a couple of cairns and a possible way to continue, but it looked like a couple more pitches of climbing and the clock was against us. I thought retreating back down was probably the best option rather than try and get off in the dark. As it was it was dark for the last abseil to the ground, but no real dramas. Herbert was not awaiting us:-(

We headed back to the van only to find Herbert lying prostrate in the middle of the road not wanting to move. He needed quite a bit of fussing before he felt a little better and decided he might join us back at the van.

The third and final day we ticked off some sport pitches in the canyon and had a welcome wash in the stream, as we would be heading for Bariloche early the next day.

It was very sad saying goodbye to Herbert the faithful hound, but we did, he didn’t understand why he was being abandoned again. However we had to return to our ski based objectives, this is difficult to explain to a lonely dog.